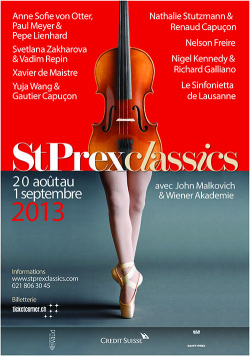 Warm up for St Prex classics festival on TV tonight

GENEVA, SWITZERLAND – The St Prex Classics is one of Switzerland’s youngest, smallest and most elegant outdoor festivals, and Thursday night 30 May you’ll have a chance to see what the fuss is all about for this relative newcomer. RTS is showing highlights from the 2012 festival tonight. If you miss this special you can find it on the festival’s web site starting Friday 31 May. This year’s festival features a surprising and remarkable mix of artists and arts, a fusion that offers surprises, one of the features of the festival. It runs from 20 August to 1 September, 17 concerts with stars from the worlds of opra, classical music, jazz, dance and cinema, in the Vieux Bourg or old town of the Lake Geneva waterfront medieval village of Saint Prex. The 2012 festival was the first year that a new cover, the floating Luna, created with a team from EPFL, was used for the event. One name well known to English-speakers is American actor John Malkovich, who has starred in more than 70 films, including Empire of the Sun, The Killing Fields and Dangerous Liaisons. luna1_construction_090812 The luna frame, later covered by an enormous half-sphere white top, being installed in the old town of Saint Prex in August 2012, for the St Prex Classics Festival He will be appearing with the Wiener Academie for two evenings, in a performance that blends theatre, classical music and opera. Other stars who are part of the 2013 festival include: pianistes Yuja Wang and Nelson Freire, violonists Vadim Repin, Renaud Capuçon and Nigel Kennedy, accordeonist Richard Galliano, dancer Svetlana Zakharova, opera singers Anne Sofie von Otter (who will be moving over to jazz) and Nathalie Stutzmann, cello playr Gautier Capuçon, harpist Xavier de Maistre with Paul Meyer on clarinet and the Pepe Lienhard Big Band. Tickets available online via Ticket Corner