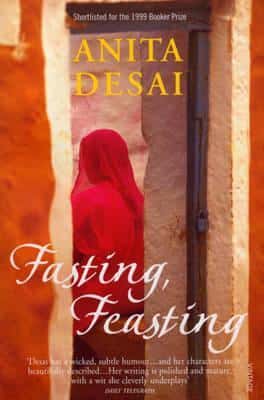 The 2-part novel, Fasting, Feasting by Indian novel writer Anita Desai is where you get to know a particular Indian family. The daughter, Uma, isn’t particularly bright or attractive and is totally under the control of her dominating and demanding parents.

Even when her baby brother was born, she wasn’t allowed to stay in her convent school but was withdrawn so that she could be the one to care for the new baby.

Having to look after her baby brother full-time she was denied the chance to carve out a life of her own or to even look for a job.

There is also a younger sister but she married and managed to escape her family’s control. She escaped to Bombay but PapaMama’s attempts to get Uma married just failed and any dowries collected were just stolen by sly men.

In the story, PapaMama exploits Uma’s good nature and the first part of the book ends with the spreading of ashes of the beautiful, successful member of the extended family who became a victim of the greedy, ambitious family she married into.

The realities of India are portrayed in this book of Desai.  In part 2, the novel takes the reader to Massachusetts where the baby boy, Arun has been sent to study. This is perhaps where the novel really started gaining momentum. Arun has always been adored and pampered but he has also been forced to live up to his father’s ambitions and to study.  During the summer holiday, Arun is to spend time with the Patton family in the United States of America.

This is yet another dysfunctional family and Mrs Patton forces Arun to follow what she believes is a vegetarian diet. The boy all but starves on her diet of salads and vegetables.  He also has to go with her on her grocery shopping trips to different supermarkets. Mr Patton has barbecues and there is a chapter describing one of these and it is super funny. However, the novel isn’t designed to be funny and the conclusion is actually frightening.

Getting through Swiss Customs Hassle-Free