The controversial black sheep poster from the election campaign of the right-wing UDC has been removed. The poster has created a burst of outrage among people both outside and inside Switzerland.

The UDC (People’s Party) has replaced the sheep’s image with an image of Christophe Blocher who is the party leader and a cabinet minister. Now you can see a smiling Christophe Blocher standing in front of the swiss flag in that image.

A party official told Le Temps that the poster change was pre planned but the appearance of Christophe Blocher in the image was not clear. The UDC (People’s Party) is known for its activities as they have shifted the heat from one side to the other several times.

Switzerland is going to hold the federal elections in mid-October.

“Perfect Sunday” in St Prex: Some Suggestion by us 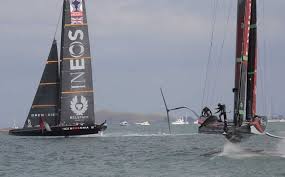