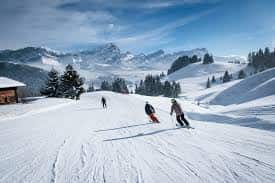 Winter sports guide for the Lake Geneva Region: where to go and what to do

For snowball throwers, accomplished skiers and everyone in between there are a large variety of fun-in-the-snow activities in the Lake Geneva region.

Skiing at St Cergue The GenevaLunch winter sports guide has three parts, the first two organized by sport. We’ll be building these guides during January, so keep checking for updates. The third, which is scheduled to appear at the end of January, is organized by resort. The guides are in alphabetical order. We want to make these easy for you to use, whether you are hunting for places to cross country ski or you plan to take visiting Cousin Heloise out for a day of extreme snowboarding in Verbier and wonder what you can find for Grandmother to do.

During the winter we will regularly update the guide with what’s on offer in this region, further afield in Switzerland, and also in France. And please send us your additions to the guide, to [email protected]: GL is a community service site and you are part of the community!

Know-it-all Passport (whose author contributes regularly to GL) has 10 excellent pages on winter activities, including useful information on ski camps for kids.

Most resorts in Switzerland now offer Snowcare for SFr4 a day (2006-07) to cover costs related to accidents on the slopes, including obligatory RC (responsabilité civile) insurance for injuring others. Note: this does not include your medical care!

The most expensive option is renting equipment for a day – daily rates fall sharply the longer you rent. It’s also usually less expensive to rent outside resort areas and the best deals are by the season. GL tip: Soulier Sports in Biere, Vaud, has for some years offered excellent rental prices: 021 809 5483.

Note that most schools and communes have annual sales, usually in November, of used equipment. Check the material for damage, but this can be the best way to make family skiing affordable, especially with fast-growing kids.

You need winter tires to go higher than 800 or 1,000 metres from November to April, more or less, although they are useful even at lake level during the winter. If you are traveling to resorts, be sure to have chains in your car – and know how to use them! – but you rarely need them lower than 1,000 metres, and only in resorts when the snow is falling heavily. Resorts in Switzerland tend to be better about maintaining access roads and parking lots than French ski resorts. Parking ranges from free (Aminona, VS) to SFr5-10 a day in larger resorts.

Meteo Swiss but check individual resorts’ snow reports and weather pages, as these tend to be more local and up to the minute. Note that if you google a resort by its name you’ll fall first on sites by companies that sell travel and rent equipment – most of these have no direct link to the resort and their information is rarely updated as often as it might appear. Use the links listed in the GL winter sports guide or remember when you google to put in resort name + tourism to reach the official tourism office. Ski lifts are generally managed separately and will have their own web sites; tourism offices link to this. Two sites link to several resort ski lifts, but there is a drawback – not all of the lift companies work with them. The Swiss National Tourism Office runs a Swiss snow report but Verbier does not participate in it and updates only its only pages. The association of ski lifts in the Valais has some good information on Best of Snow but Crans-Montana, for example, does not update its pages there.

Dozens of people die in avalanches every year in Switzerland. The danger should not be minimized, but learning when and why they occur is the best prevention. The Swiss Federal Institute for Snow and Avalanche Research (SLF) in Davos publishes a short, excellent online guide aimed especially at Swiss Alps snowboarders, good background reading. The SLF has daily online avalanche bulletins. Both are in English. The SLF also has the most reliable online information around, with maps, for fresh snowfall amounts, snow height and snowpack stability as well as other details of particular interest to hikers and riders. Much of it is in German only, but the maps are easy to grasp.

We can all be kids in the snow. (copyright 2006 Office du tourism du Canton de Vaud)

Some years ago the only way to take lessons was to sign up with each resort’s official ski school instructors. There were two official groups running these but they merged in 2002 under the name Swiss Snowsport. In 2004 their training programme was accepted by the federal government, which now allows them to award federal certificates to those who pass their tough courses.

The teachers are excellent and every resort has them, but an alternative culture with other schools grew up with snowboarding. The backbone of this excellent winter sports teaching system remains Swiss Snowsport, which brings together 195 schools and 4,300 teachers who have Swiss federal certificates. They give 6 million hours of snow sports lessons a year – this is big business on the slopes.

If you’re looking for lessons, your best first stop is the official school but if you’re tempted by one of the others, ask around in the resort for recommendations and check on the teacher’s certification. Some of these schools offer a good range of activities such as snow-tubing and snow paragliding, worth checking out.

Freestyle snowboarding and skiing used to be something you simply went onto the mountain and did but courses are increasingly being offered. Close to Lausanne, Rochers-de-Naye and Les Pleiades have set up schools for these.

Rates: generally around SFr60 (€40) an hour for private lessons,  dropping to SFr55 for three hours in group lessons, but there is some variation between resorts.

If you don’t want to ski, try something different. How about about velogemel snow bikes? Or skibocks (a one-legged milking stool fixed to a ski)? You could also try night-time skiing, dog-sledding, snowshoe hiking and Nordic Walking in the snow. Be adventurous!

SPORTS (to locate resorts and towns, GL suggests you use local.ch or map.search.ch, both of which work well in English.

Curling, with number of halls

Site to check out: Dog sledding with the Musher Club Suisse

Sites to check out

The Portes du Soleil region including Morzine, Les Gets and Avoriaz

See what people are saying in the Switzerland Travel Community

The history of winter sports in Switzerland from swissworld.org

The GenevaLunch winter sports guide was prepared by Liz Wilson with Ellen Wallace. Liz is a regular contributor to GL, who is based in Lausanne. She is a consultant working in English-language communications. Ellen is the editor of GenevaLunch.